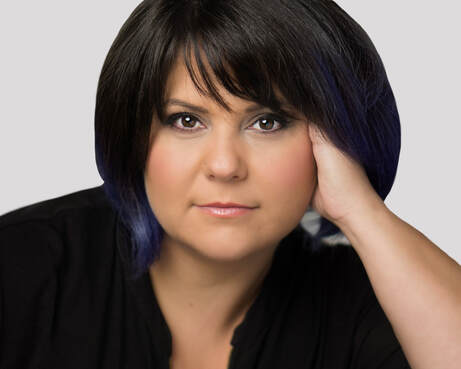 ELIZABETH BROCKWELL  has been a performer as far back as she can remember.   She has had over 15 years of training that started in New York and continues to grow to this day. She attended both BAK and Dreyfoos School of the Arts for theater and went on to continue her education at the University of the Arts in Philadelphia. After receiving her BFA in Musical Theater, she worked with some prestigious theater companies in the Philadelphia area.
She then relocated to South Florida to develop her career and became a dance teacher and choreographer while maintaining her passion to perform. Some of her performance credits include COMPANY, NUNSENSE, EVITA, 9 TO 5, and NEXT FALL where she was awarded the 2013 Broadway World Award for Best Actress in a Play. She continued to perform professionally all around the south Florida area until she got married during her run of FIDDLER ON THE ROOF at the Maltz Theater. After that production she decided to take a step back from the stage and focus on the next chapter in her life.
She continued her career as a dance teacher, choreographer, and director and has truly loved being an educator.  Some of her favorite productions that she has directed at Performing Arts Academy of Jupiter have included YOU’RE A GOOD MAN CHARLIE BROWN, SEUSSICAL, LITTLE SHOP OF HORRORS, BYE BYE BIRDIE, LITTLE WOMEN, and most recently 13 THE MUSICAL. She has loved being a part of the creative team at Performing Arts Academy of Jupiter and has truly loved bringing her education and experiences to the next generations of musical theater professionals.
She is very excited to finally be back on a stage after a 7-year break and she couldn’t be more thankful to Jerrica and Eric for asking her to be a part of this amazing opportunity. She feels so honored and blessed to be able to work with each of these incredible professionals and is truly humbled by their talents and gifts. Thank you for letting me fall in love all over again.

​RICKY NAHAS  does not have enough words to express the love and gratitude he has to be apart of this project. Singing, creating and laughing with these 4 beautiful talented artists the past few months has brought such joy to his life! Im beyond honored to be a part of this!!
Ricky is a musical theatre performer, director/choreographer, and voice and dance teacher who has spent more than a decade performing in national tours, regional theaters, and in theaters throughout Europe. He has been seen onstage recently at the Maltz Jupiter Theatre in Les Misérables, The Wiz, and Joseph and the Amazing Technicolor Dreamcoat.
Other regional stage credits include Radames in Aida, Mungo Jerry in CATS, Swing and Dance captain in the National Tour of Altar Boyz, Double J /swing in the National Tour of Saturday Night Fever. His TV credits include Burn Notice and Guiding Light. Proud member of Actors Equity.
Since moving from NYC TO South Florida Ricky has directed/ choreographed - The Music Man, You’re a good man Charlie Brown, In the Heights, Sister Act, Guys and Dolls, Seussical, Little Shop of Horrors, Madagascar jr, The Wizard of Oz jr, Mulan jr, James and the Giant Peach jr, The musical Adventures of Flat Stanly jr, The Little Mermaid jr, Peter Pan jr.
legally blonde, Rent, fame jr, 101 Dalmatians jr, Guys and Dolls jr
Annie, Chicago, dirty rotten scoundrels, Oklahoma
Ricky is beyond grateful to be currently teaching private voice/ acting coaching from his home studio in west palm beach.